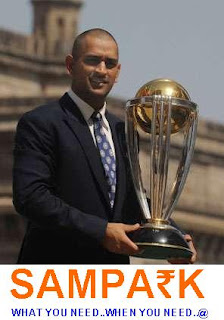 Over one billion shareholders watch you deliver annual results with heady expectations of record-breaking profits and revenue. Each shareholder thinks he can run the company better.

Statistics-spouting analysts in TV studios egg on the shareholders, diagnosing your every move with definitive authority.

As a CEO on whom ride the hopes of a demanding billion people, the captain of Team India is like a batsman facing a flurry of nasty yorkers. It's a leadership test that can make the most acclaimed CEO cringe. But not MSD.

The captain of the Indian cricket team delivered a dream result to his shareholders, the joys of which surpassed the benefits of any dividend or bonus.

In the tough final against a strong Sri Lankan team, the grit and guts displayed by Mahendra Singh Dhoni at Mumbai's Wankhede stadium has corporate captains of India singing glories of his leadership qualities.

Eight hours of MSD's excellent captaining got him more than a million accolades from one and all.
"A man who was not showing form came out with impressive grit in the final.
Team members in a company look up to bosses like these. People look for the body language of the leader.
He is always in charge of the situation. Dhoni is very decisive and he does not waffle," says Mohan Das Pai, member of the board, Infosys.

Of course, such victories are not the result of a day's performance.
K Ram Kumar, executive director, ICICI, recounts how Dhoni took the reins from stars such as Rahul Dravid and Sachin Tendulkar and built a team that benefits as much from the presence of the world's most experienced player as from its young, talented and at times erratic performers.
"One must keep in mind that when Dhoni took over, Dravid and Tendulkar were stars.
His point to them was that I am the captain but you are far senior and better than me.
This is something to be cherished. A statement like this makes seniors secure. It's an important quality of a good leader to recognise the extremely capable in the team, rather than feel insecure about their presence," says Ram Kumar.

For juniors, Dhoni followed the principle of support with stick.
Ram Kumar calls it positive manipulation.
"When Dhoni comes out and tells the media that Zaheer Khan is a great bowler and he will deliver, he is being positively demanding.
The confidence expressed in public puts positive pressure.
Some leaders do this by invoking fear," he says.
Team building is just a part of the job.

How about dealing with the competitors and handling volatile situations?
Santrupt Misra, Group Director, HR, at Aditya Birla Group, gives Dhoni top marks in innovating and experimenting in real time.
"Dhoni continuously tries to innovate and experiment (e.g. when everybody said he should go with Ashwin, he played Nehra).
This means he knows both the game as well as the people very well, which, of course, is another great leadership trait.
He is not overly ecstatic when he succeeds nor is he utterly down and out when he loses. In a volatile environment, this is a great trait to have."

Getting the best out of your team doesn't mean you don't face tough situations yourself. Says Suvojoy Sengupta, MD India, Booz & Co: "Dhoni isn't afraid to put himself in the firing line, even at the risk of personal failure-as he proved in the final.

Besides he can keep the competitors guessing on a few things. Inspirational leaders keep some tricks up their sleeve and use them to turn around seemingly hopeless situations.

MSD is a master at this." Given the abject failure in 2007 World Cup and then, under MSD, the subsequent trail of victories, Dhoni is the turnaround man Indian companies would love to have as CEO.